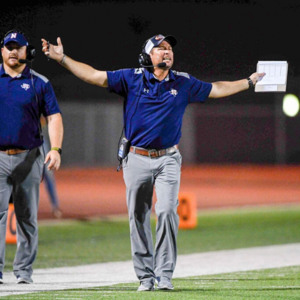 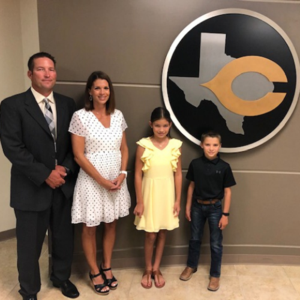 CISD Trustees Monday night announced Kyle Hardin as the district’s next athletic director and head coach. Hardin has served as associate head coach and offensive coordinator for McKinney North since 2013 and is set to take over a Pirate athletic program primed for a big jump to 5A Division II in the upcoming 2020-21 school year.

“I can’t begin to say how excited I am to be in Crandall ISD,” Hardin said. “I want to thank Dr. Eldredge for her hospitality throughout the interview process and the Board of Trustees for trusting me with our student athletes. Now, let’s go to work.”

During his seven years at McKinney North, Hardin has helped guide the Bulldog football program on one of the area's most successful runs. Since 2013, North has made six playoff appearances and claimed two district titles—one each at the 4A and 5A level. They also claimed four bi-district titles and, in 2014, advanced to the 5A Division I quarterfinals.

He will inherit a Crandall squad coming off a 10-3 season after advancing to the regional semifinals for the first time in almost 30 years.

The prolific numbers churned out by Hardin’s offenses have contributed mightily to McKinney North’s success. During his seven years, the Bulldogs have averaged more than 40 points per game. Last season he produced the most explosive offensive unit in 5A by averaging 574.1 yards and 58.9 points per game, while also going undefeated in district play for the first time ever.

In 2019, Hardin guided a quarterback who set the McKinney ISD single-season record for most passing yards (4,187) and touchdown passes (45). His balanced play calling also produced a 1,700-yard running back and a 1,400-yard receiver who both combined for 39 touchdowns.

While Hardin will look to duplicate those football successes with the Pirates, the athletic director role is also one he relishes for its opportunity to make a positive impact on boys and girls alike, in sports beyond just the gridiron.

“This job is something that has been a goal of mine throughout my career and it is a charge I take seriously,” Hardin said. “The athletic director sets the tone for all athletics in Crandall ISD. Our tone will be one that creates opportunities for as many kids as possible and develops them into quality young men and women.

“Student athletes are a pleasure to be around. I look forward to that opportunity every day and I assure you, I will treat and take care of our kids in CISD the same way I do my own two kids.”

Prior to McKinney, Hardin coached eight years at Rowlett High School in Garland ISD. There, his teams made eight-consecutive playoff appearances, won four bi-district championships and the 2011 5A Division II area championship. He also coached the Rowlett boys track and field team to back-to-back 5A state titles in 2008-09. At the time, 5A was the largest classification in UIL.